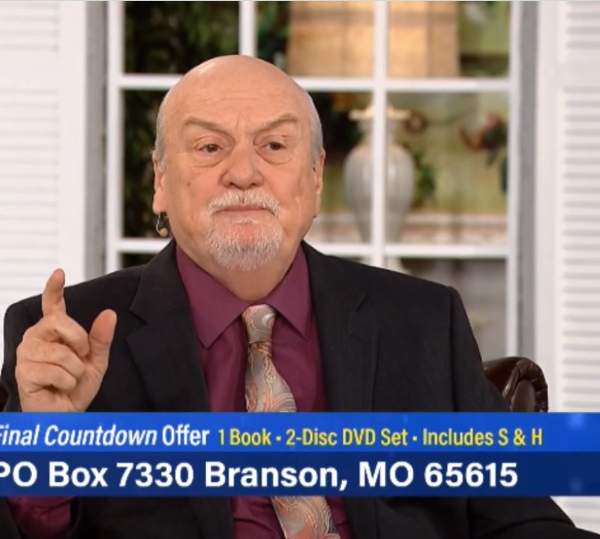 A guest on the Jim Bakker Show has announced that an asteroid will hit earth in 2029, giving rise to the Antichrist.

Thomas Horn, who is described as a longtime television and radio personality, best-selling author and publisher, who also serves as the chief executive officer of SkyWatchTV, made the comments recently on the April 8 edition of the Jim Bakker Show.

According to Right Wing Watch, who posted the video below directly from Bakker’s show, Horn states that the asteroid will unleash a virus that will then give rise to the Antichrist.

“I believe that Apophis is carrying an alien microorganism on it in which a virus is being sustained,” he said. “I believe it’s going to make coronavirus look like a walk in the park. On impact with the Earth, the contagion that is going to be brought to this planet. I think that it’s going to be a trigger event that ultimately leads to the Mark of the Beast, which will mean that you’re going to have to be vaccinated.

“A contagion during the Tribulation period could sweep the world. Literally tens of millions of people are dying by the hour, and an international cry goes up around the world for some kind of cure, a vaccine. Well, a man comes forward; a single individual who happens to be the Antichrist and he’s the only man on Earth whose blood is naturally immune to this alien virus. And so a vaccine is created from his blood by which all mankind then are required to be inoculated. So, it’s almost like a black communion.”

In his previous book, The Wormwood Prophecy, Horn states that, “Is the Wormwood star from Revelation 8 already headed toward Earth? Are NASA and high-level government officials aware of an asteroid that is on a collision course with our planet? Is that why President Trump sanctioned a colossal increase to planetary defense? Do the prophecies from ancient cultures and religions across the globe all point to a catastrophic planetary event that has scientists and politicians taking extreme preventative measures under the public radar?”

Horn has reportedly discussed his discoveries in a variety of media, including on Sid Roth s It s Supernatural!, The Jim Bakker Show, Daystar TV s Celebration, and The 700 Club.