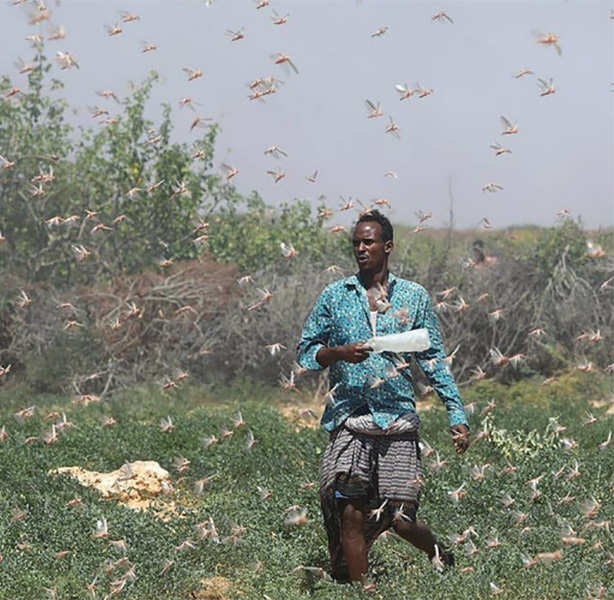 “The world has just weeks left to act before an upsurge in locusts in the Horn of Africa becomes a full-blown plague,” the UN Humanitarian office has stated.

Unfortunately that urgent appeal and warning from the United Nations is falling on deaf ears as an appeal for some €70 million in emergency funding is still far short of its objective.

There is a catastrophe happening in Africa and spreading – it is one of the worst disasters in human history. This is being caused by an enemy most feared by ancient civilizations – and it is known as the desert locust.

This infiltration of the billions of locusts could lead to deadly threats of hunger for millions of people in the regions. The United Nations has warned of the risk of a catastrophic famine.

Ethiopia and Somalia are experiencing the worst locust invasion in 25 years and Kenya in over 70 years. The insects are causing extensive crop damage and are seriously threatening livelihood and food security in the Horn of Africa. A swarm can contain up to 150 million locusts per square kilometre, which in a day can destroy crops sufficient to feed 2,500 people.

Foreign and Defense ministers from Russia and Italy have agreed to meet in Rome for a crises meeting. The catastrophe is threatening to also overwhelm Italy.

Alarm bells were sounding off in April 2019 when the locusts were migrating into Saudi Arabia across the Persian Gulf and then into Iran, searching for more crops to destroy. However, the window to contain this crisis is fast approaching its closing time.

These insects are methodically wiping out crops all over the land that are needed to feed over 530 million people. It is now sweeping into Uganda, Tanzania, South Sudan, and into Oman, Saudi Arabia and Yemen. Pakistan has now declared a national emergency. India is also in trouble.

India and Pakistan have put aside their differences to come together in an effort to abort this dire threat to all of humanity. The main focus is now to poison these creatures with insecticides

Somalia has also been hit very badly and is trying to control this invasion by a fungus with the use of biopesticides. Kenya is experiencing the worst infestation in 70 years.

Millions of locusts are also descending on the town of Tafilah in South Jordan, which is a hub for olive and fruit agriculture – this could be a disaster for the area.

Starving human beings are traveling in swarms across continents and seas to escape this devastation and to find food – they are getting ready to move into Europe and the United States before they starve to death.

It is believed the locusts are maturing at a great rate. There are now billions of the insects invading many countries. At this time the locusts are in what is known as an expansion. They are powered by unusually rainy weather. They appear to be high on serotonin, and they have gone on a sex and eating binge, thus multiplying at an enormous rate.

Farmers are screaming and banging pots and pans to try and overt the attacks, but it’s doing little to deter all the locusts that are swarming around. There are billions upon billions of them.

Jens Laerke of the U.N. humanitarian office in Geneva proclaimed that even a small swarm of insects could consume food for 35,000 people in a day.The world has only until the beginning of March to bring this devastation under control – then the rain and the planting season will begin. With these additional rains that are expected the numbers could increase by another 500 times by June. These locust infestations are definitely historic.

Is this plague related to biblical times and prophecy? According to a Christian evangelist the swarm of locusts devouring crops, particularly in Saudi Arabia, is evidence of the ten plagues of Egypt that is written about in the Bible. Many people worldwide are seeing this could be the truth.

Lynn Goldsmith
Editor, Journalist and Author of Beyond These Eyes, the Biography of Blind surfer Derek Rabelo