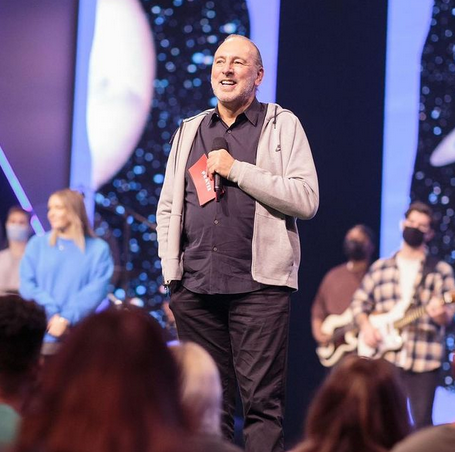 Hillsong’s Global Senior Pastor, Brian Houston, has announced that he is stepping down from his role in the church ahead of his scheduled court case.

Pastor Houston, who last year also stepped down from the church’s boards, made the announcement after legal advice deemed it would be ‘Best Practice’. He announced he intends to step down for the entirety of 2022, with Pastors Phil and Lucinda Dooley, who currently lead Hillsong South Africa, taking on the role.

The founder of the megachurch made the announcement during the Sunday morning service at Hillsong’s Sydney church.

In a statement, he said, “Last year, I also received unexpected news of charges against me that allege the concealing of information that may have been material to prosecute Frank Houston. These allegations came as a shock to me, and it is my intention to vigorously defend them.”

His father, Frank Houston, who died in 2004, is accused of the alleged abuse of a young man back in the 1970s. Pastor Houston has faced ongoing criticism for reportedly finding out about his father’s sexual abuse of young boys. There is no inference that Brian Houston was any way involved in the crime.

New South Wales detectives served his lawyer with a court attendance notice in earl August 2021, requiring Pastor Houston’s appearance at Sydney’s Downing Centre Local Court on October 5. He has already been grilled over having any involvement in a 2014 Royal Commission. He entered a not guilty plea in October and his case had been deferred until this year.

“In September last year, I learned it was necessary for me to step aside as a director of all Hillsong boards during this season, enabling me to give attention to these charges,” he said. “But recently, we made a decision that may come as a surprise to you, and I want you to hear it from me directly.

“In December, during our board meeting, Hillsong’s external legal counsel gave the board advice regarding the current charge I am facing – that it would be ‘Best Practice’ for me to step aside completely from church leadership during the court proceedings. The court processes are likely to be drawn out and take up most of 2022 (especially considering the backlog in the courts, exacerbated by the Covid pandemic). Along with this, the board and I have had detailed discussion around the requirements for leadership. We have talked about the effects of the situation with my father, which go back many years up to the current legal case, and the impact this has had on me emotionally.

“The result is that the Hillsong Global Board feel it is in my and the church’s best interest for this to happen, so I have agreed to step aside from all ministry responsibilities until the end of the year.

“As I have said, most of you know the court case I am facing is related to circumstances surrounding my father, and I need to be fully committed to preparation and engagement with the case and work closely with my lawyers in defending this charge,” Pastor Houston said. “I have said, including in a prior statement, that I intend to fight the charge and welcome the opportunity to set the record straight.”

He also took the opportunity to announce that his wife, Bobbie Houston, intends to remain “fully engaged in church life” including leading the upcoming 2022 Colour Conference and the church’s Sisterhood women’s movement.

“During 2022, I have asked Pastors Phil and Lucinda Dooley to take on the role of Interim (or Acting) Global Senior Pastors,” he continued. “The Dooleys are well-loved by many in our church, having successfully served as our youth pastors in Australia for many years. Over the last 13 years they, with their family, have resided in South Africa and have raised up a phenomenal multi-campus Hillsong Church.

“Bobbie and I wholeheartedly support them. We want to thank them and their family for stepping into this role and committing to spend a considerable amount of time in Australia for this season. I believe they will experience our church’s full support as we move forward and lift up Jesus as the Hope of humanity. I believe it will be a year of divine favour.”