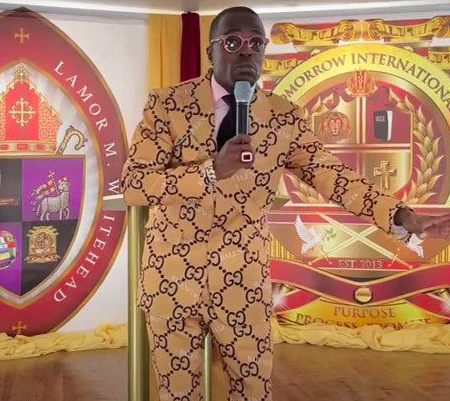 Controversial Brooklyn pastor Bishop Lamor Miller-Whitehead has been arrested after video appears to catch him pulling the hair of a woman while preaching in church.

Bishop Whitehead, who heads up Leaders of Tomorrow International Churches, was in the middle of his sermon last Sunday when a woman distracted him midway through. He immediately confronted the woman from the stage, and she approached him, video shows him grabbing her by the hair.

Whitehead claims that she was making her way towards his wife and children, who were seated during the service, so he grabbed at her to protect them.

The pastor was in the news two months ago when he was robbed at gunpoint as he preached as thieves entered his church and stole more than $400,000 in jewelry while he spoke from the pulpit.

The Rolls Royce-driving pastor was filmed as three armed robbers burst into his church and took between $400,000 and $1 million in jewelry. The three thieves were seen entering the Leaders of Tomorrow International Ministry on Remsen Avenue close to Avenue D in Canarsie.

They allegedly flashed guns and demanded property from Bishop Whitehead and his wife before fleeing in a white Mercedes.

In a video of the service, which was being live streamed but has since been removed from the church’s social media channels, Bishop Whitehead is heard asking his flock: “How many of you have lost your faith because you saw somebody else die?” moments before the men enter the church.

He is then seen dropping to his hands and knees and repeatedly saying, “Alright, alright,” before a man wearing a black face mask and holding a gun enters the frame.

The controversies then got even stranger, as earlier this month he sued two men, accusing them of smearing his name in social media comments, where they allegedly accused him of being a drug dealer and a scammer.

New York’s Daily News reported that he is seeking $20 million each from defendants DeMario Q. Jives and Larry Reid.

“As a result of (the defendants’) conduct, Plaintiff lost business deals, church members and income,” read the bishop’s court filings. “(Defendants) are liable to Plaintiff for defamation, libel per se and slander per se.”

The bishop “is wearing the same jewelry that (he) got robbed in,” the court papers charged Jives with saying on his YouTube channel. “This n—a is out here drug dealing.”

Reid was accused in court documents of making online accusations that Miller-Whitehead “scammed people out of money” and “will be locked up in about three months.”