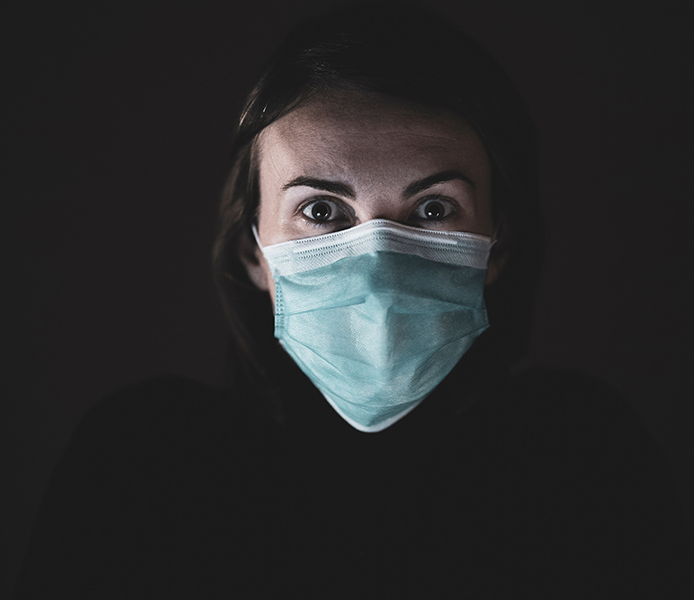 Most folks agree that the virus is real, but our unprecedented response to it has been as alarming as it has been life-altering.

Millions are living in constant fear and isolation. The illusion of safety created by the continued lockdowns, shutting down of businesses, and general fear-mongering have actually led to the fueling of addictions, increased rates of suicide and domestic abuse, and a host of other serious problems you are not seeing reported every 30 seconds in the news. It’s not worth the cost, folks. . . not even close. For example in California, can we not locate total deaths in the State? Everything appears to be COVID related.

Related: Pastor’s Message: ‘Open or Die, Fight or Fade Away’

Granted, if a person’s not feeling well and they’ve been recently exposed to COVID, that’s one thing (use wisdom), but if somebody was almost around someone who might have caught it from a third cousin who may have walked by someone on the beach who could have touched that sneezing guy’s dog, that’s another thing.

There is a clear agenda at work from packed crowds at Joe Biden “victory” celebrations to an almost non-existent reporting of the flu. A headline in November read, “Quarantined, sick voters can go to polls on Tuesday, CDC and DPH say,” and the NPR recently reported that Tesla’s Elon Musk announced on Twitter that he’d taken four rapid coronavirus tests, with half coming back positive. Musk, like many of us, have skepticism about the treatment and the truth behind the virus. It seems that the virus is only dangerous when it suits those in authority. Mom-and-pop shops are kept closed and forced out of business while the large, and politically connected chains, are allowed to stay open.

There is no outcry about masks and distancing when thousands of protestors or Biden-supporters gather for a party, but when 50 people meet to pray for our nation and worship God it’s labeled as a “super-spreader.” Closing churches has been a central focus, while at the same time California governor Gavin Newsom actually stated, “For those of you out there protesting, I want you to know that you matter. To those who want to express themselves…God bless you. Keep doing it. Your rage is real.”

And if this were not absurd enough, now Californians are told that at Thanksgiving we are to be limited to no more than three families and that if we do meet, no one can play a trumpet or tuba. Singing is “discouraged” as well. What’s even more interesting is that diners at restaurants are told to keep their masks on “in between bites.” Seriously—this is from the governor’s office! It would be comical if it wasn’t true. I respect our governor and pray for him and his wife, and their kids, but it’s time to take a look at all the inconsistencies.

Could those in positions of influence and authority be using the pandemic as an opportunity to start what they term a “global reset”? It appears that many have a vested interest in doing so. The World Economic Forum put this on their website: “There is an urgent need for global stakeholders to cooperate in simultaneously managing the direct consequences of the COVID-19 crisis. To improve the state of the world, the World Economic Forum is starting The Great Reset initiative.” It looks like they are taking Rahm Emanuel at his word when he famously stated, “Never allow a good crisis to go to waste.”

We also have Dr. Fauci’s warning of a “surprise outbreak” during the Trump administration when he spoke in 2017, and Bill Gates and his wife appearing to be excited about a second wave. Was this just a good guess on Fauci’s part? And why is Gates so happy about outbreaks, pandemics, and deaths? If it seems almost like high-ranking officials have already planned out these exact virus scenarios, it’s because they have. It gives the average American great cause for concern. Former CBS News reporter Sharyl Attkisson  has exposed many other inconsistencies as well, which she lays out in detail on her website.

Then we have the huge inconsistencies with masks. We wear them before entering Costco yet pass by hundreds of people in close proximity who all touch the same credit-card machine. Wear masks to enter a restaurant and walk to your table, but once at the table you can take them off, even though you are talking to the employees within the magical six-foot bubble of COVID safety. It defies logic and common sense. We enter banks with masks but then exchange cash with the teller.

Sure, we can walk around with gallons of hand sanitizer, but then we need to worry about the FDA’s updates on which hand sanitizers are safe and which ones cause more harm than good by causing antibody resistance. Every contradictory statement and all the nonsensical government guidance is designed to perpetuate the fear, not alleviate it, and certainly not to actually stop the “pandemic.”

For proof, just look at the skewed numbers, fake photos, and elevated stats custom-crafted to instill fear and encourage mindless compliance. As just one example, a recent account of a man dying of alcoholism caught national attention because his cause of death was recorded as COVID-19.

Reports of distortions of facts abound, such as doctors being told to write COVID-19 as the cause of death even if it was not. The San Diego Tribune just ran a story quoting county supervisor Jim Desmond as saying, “We’ve unfortunately had six pure, solely coronavirus deaths—six out of 3.3 million people.” I’m not minimizing even one death, but there is a greater chance of dying just walking down the street than from COVID-19 in most parts of the USA.

Even though some dismiss the CDC’s report that in 6% of the deaths COVID-19 was the only cause mentioned, the truth is that this is very important. When a person passes away, there can be a number of reasons listed on their death certificate. When we say, for example, that 225,000 people have died of COVID, that’s very misleading. It is more accurate to say that they died with COVID, not necessarily because of COVID. How do we know that a bad case of the flu wouldn’t have led to death as well? How do we know that although they had COVID, they actually didn’t die of pneumonia, heart disease, or an array of other issues?

Although even one death is heartbreaking, we must look at the whole picture. I guarantee that if someone like Barack Obama were president, these numbers would have been downplayed like they were for swine flu. From  April 12, 2009 to April 10, 2010, the CDC estimated that there were 60.8 million cases of H1N1, resulting in 274,304 hospitalizations and 12,469 deaths. Compare the 60.8 million H1N1 infections with the less than 2.5 million COVID infections, and imagine if they recorded numbers based on how they do it now. I bet the 12,469 would be off . . . way off.

The debate rages on whether hospitals are paid more for COVID patients, but I don’t recall this type of dispute for H1N1. And if it is true that hospitals are not being paid more for COVID patients and it is all just a crazy right-wing conspiracy theory, then why are people reporting that they received a call that they tested positive for COVID when all they did was sign up for testing, stand in line, and then leave because of the wait? If nothing else, it is worth legitimate investigation.

Ironically, we don’t hear much about the flu these days. We often don’t get tested for the flu when we are sick. We’ve not been quarantined, nor have we shut down the economy or enforced mask mandates, even though up to 800,000 people are hospitalized and as many as 61,000 people die every year from the flu. Yet we use words like “seasonal” or “caught a bug” for the flu, while words like “plague” and “pandemic” and other alarming terms are used for COVID. Folks, again, continuing lockdowns and shutting down businesses is not worth the damage it is doing to our society.

Worse, it is not even the right approach, assuming the goal is to actually solve the problem rather than perpetuate it.

Is Herd Immunity and Building Better Immunity the Key?

Expert epidemiologist Dr. Knut Wittkowski, explains what will solve the problem: “The only thing that stops the disease is herd immunity. About 80% of the people need to have had contact with the virus, and the majority of them won’t even have recognized that they were infected, or they had very, very mild symptoms, especially if they are children.” So, it’s very important to keep schools open and kids mingling to spread the virus to get herd immunity as fast as possible, so that after about four weeks the virus will be exterminated.

If there are not ulterior motives working behind the scenes, then why are we not helping people build their God-given immune systems? It seems like every doctor is talking about “underlying health issues” and “compromised immune systems” but doing nothing health-wise to fix it.

A weak immune system forces your body into overdrive and is severely taxing physically, which can lead to significant health issues, including death. Most understand that those with compromised immune systems are more susceptible and even die from the flu. I often wonder how many diseases could be prevented or reversed by focusing on diet and lifestyle. Multiple sclerosis, for example, is a disease where the immune system slowly consumes the protective sheath that covers the nerves.

Can this happen because the body is kept in a toxic state and not allowed to heal? If the immune system is already taxed because of poor health and bad eating habits (e.g., sugar, food coloring, additives, and chemicals), more fallout will occur. Sadly, most want the easy route: “Just give me a pill and a potion.”

A personal example involves my youngest daughter. She was not breathing well at night. The physician said that her tonsils and adenoids were inflamed and needed to be removed. Knowing that tonsils and adenoids help with immunity, we tried a different route first. We completely changed her diet by removing all sugar.

We focused on life-giving food and a daily nap. She was breathing well within a week, and an ear infection that had been lingering healed as well. The right nutrition, along with deep sleep, creates a powerful environment for healing. For health tips, my book, Feasting and Fasting: What Works, What Doesn’t, and Why, is a good resource.