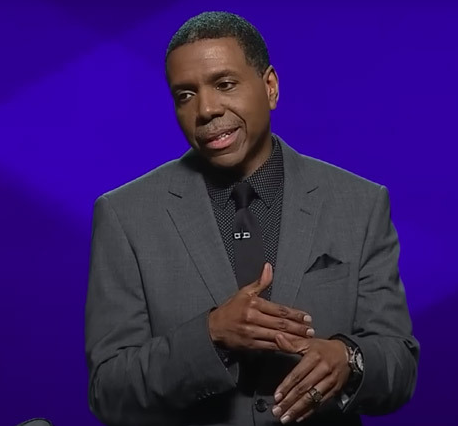 One of the key supporters of the prosperity gospel, Creflo Dollar has instructed members of his church to disregard his past teachings on tithing.

Pastor Dollar, who heads up World Changers International Ministries in College Park, Georgia, told his congregation in a sermon in late June that what he’s preached about tithing for many years was incorrect.

However, he says he won’t apologize for his past teachings.

In a sermon preached to his congregation on June 26, titled ‘The Great Misunderstanding’, he stated: “I want to start off by saying to you that I’m still growing. And that the teachings that I’ve shared in times past on the subject of tithing, were not correct. And today I stand in, and humility, to correct some things that I’ve taught for years and believed for years, but could never under understand it clearly, because I had not yet been confronted with the gospel of grace, which has made the difference.”

In admitting that he may “lose some friends and speaking engagements” over his confession, he went on to explain why tithing, the giving of ten per cent of your income to your church, is an Old Testament concept. He says he believes that that Christians no longer live under the Mosaic Law but under the freedom of God’s grace, which is part of the New Testament of the Bible.

His sermon, which can be seen below, received more than three thousand comments on Youtube, given the contentious nature of tithing.

Pastor Dollar publicly retracted his views on tithing, confessing that he has misled people with these teachings, stating that it was not biblical to tithe but up to individuals to offer according to their heart and ability. Dollar has since received praise and criticism for these statements.

At the same time, while he has retracted views on tithing, he is still a firm believer in giving. He instead encouraged his church to see their giving as an worship, in the same way Christians sing, pray and dedicate time to Christian and church causes.

“Now, for some reason, if you’re cool with starting off at 10 per cent, it ain’t no crime,” he said. “But you can’t make it mandatory the law for New Testament Christians to give 10 per cent.  That’s all I’m saying.

“New Testament is clear about giving, but not by a law that says you tithe and you won’t be cursed. You know that ain’t God no more.”

Dollar is known for controversial teachings regarding prosperity theology. He has long been criticized for living a lavish lifestyle. He reportedly owns two Rolls-Royces, a private jet and high-end real estate such as a million-dollar home in Atlanta, a $2.5 million home in Demarest, New Jersey, and a home in Manhattan that he bought for $2.5 million in 2006.

According to the bio on his website, he’s a “world-renowned Bible teacher, sought-after conference speaker, and bestselling author with hundreds of books, CDs, and DVDs in distribution worldwide. Recognized for his cutting-edge revelation and humorous, pragmatic approach, he enables thousands to experience grace, restoration, healing, and financial breakthrough by applying simple, biblical principles to their lives. He is the author of such game-changing books as The Radical Life of Grace and Why I Hate Religion, and his award-winning Changing Your World television broadcast reaches nearly 1 billion homes. His ministry includes an app available on mobile devices and smart TV’s, a dedicated YouTube channel, and the Changing Your World Network, a 24-hour online channel.”