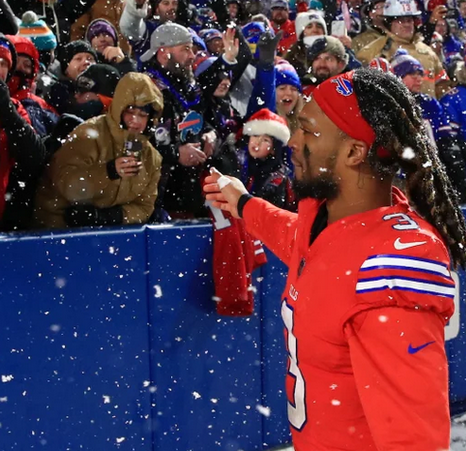 In America, and indeed the world, we are seeing anything to do with God, and more specifically Jesus, removed from society. It seems we feel we have it all together and we can manage on our own.

The world is becoming increasingly secular. Even ‘Merry Christmas’ is slowing fading into ‘Happy Holidays’. There’s Drag Queen Hour at the local library, and now, even After School Satan Club.

So we have it all under control, until we don’t, and we need God to intervene. As a case in point, I refer to NFL Buffalo Bills safety Damar Hamlan, who had a heart attack and needed CPR on the field in Monday night’s game against the Cincinnati Bengals. In scenes that stunned the nation, players gathered together to pray for the star as medical staff rushed to save his life.

Meanwhile, on NFL Live, Dan Orlovsky showed incredible courage in stopping mid-show to pray for Hamlin, as all and sundry realized that if his life was to be saved, then we really needed the Creator of the earth to intervene.

But the craziest – and best – part of Orlovsky’s move was that not only did his colleagues join him in prayer, but the nation all offered support at such a critical moment. Rather than backlash for praying to the same God so many seem to be trying to remove from our society, he was praised for what he did.

Journalists at major media outlets supported his prayers. Who doesn’t want prayer when they’re going through a tough time and a Christian says they’re praying for them?

The bottom line is that we need God in our society. We think we have it together, until we are hit by a major challenge in life and we realize that we need a higher power to intervene. The devil might have the run of the earth, but the bottom line is that he is simply the tenant, with a long-term lease. Jesus Christ is the landlord and as such, gets the final say. It is His earth and He retains 100% ownership.

People can try and remove God out of their lives and out of society, but it is impossible. The landlord is not going anywhere; He owns the earth and does not take His eye off it, not even for a moment.

So let’s be encouraged. As Christians, we can rest assured that after people try everything but God and things don’t go to plan, He is always in the background, ready to pick them up. Keep praying for our leaders and nations, as God can intervene at any time.

As a postscript, Hamlin is on the road to recovery, showing what doctors treating him are calling “remarkable improvement over the past 24 hours.” The Bills have shared that the 24-year-old safety no longer requires a breathing tube.

The Bills play the Patriots Sunday in their season finale.