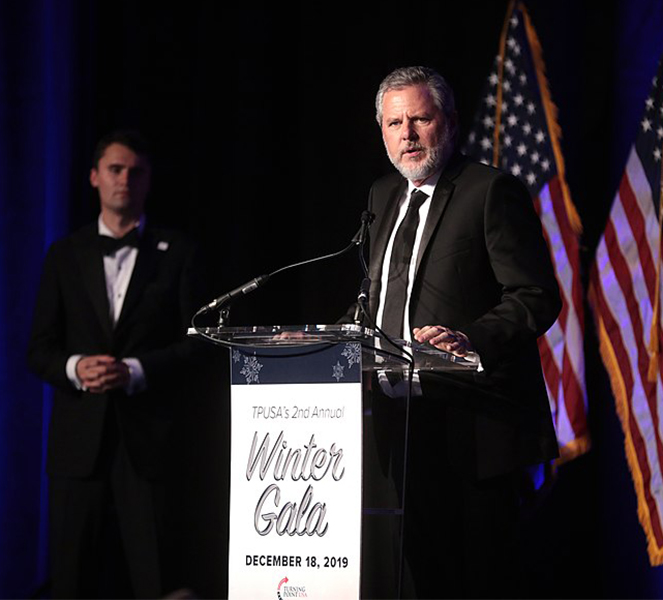 Outgoing Liberty University President Jerry Falwell Jr. is set to receive a $10.5 million payout after this week resigning from the prestigious evangelical institution founded by his father.

Falwell, who resigned after being forced to take leave for sharing a photo with another woman with their pants unzipped, also sensationally stated that his wife, Becki, had been having an affair.

The Washington Post reports that Falwell’s contract entitles him to a $10.5 million severance package due to departing from the university “without being formally accused of or admitting to wrongdoing”.

Falwell will reportedly receive $2.5 million over 24 months, equivalent to two years’ salary. He agreed not to work for a competing university during that time. After two years, he will receive around $8 million in retirement. The Washington Post  also reported that Falwell said he signed a 20-page contract in July 2019 that outlined the terms.

In an interview with the Washington Examiner, Falwell claims that his wife Becki’s affair with their pool boy, which he stated was over quickly, would see the former lover threaten them with blackmail.

While that his Falwell’s side of the story, it gets messier though. The pool boy in question, Giancarlo Granda, claimed in an interview with Reuters that the liberty boss knew about Granda’s sexual affair with his wife and liked watching them together.

“Becki and I developed an intimate relationship and Jerry enjoyed watching from the corner of the room,” Granda, 29, told Reuters in an interview

Falwell shared his full statement with the Washington Examiner, in which he stated, “During a vacation over eight years ago, Becki and I met an ambitious young man who was working at our hotel and was saving up his money to go to school. We encouraged him to pursue an education and a career and we were impressed by his initiative in suggesting a local real estate opportunity.

“My family members eventually made an investment in a local property, included him in the deal because he could play an active role in managing it, and became close with him and his family.

“Shortly thereafter, Becki had an inappropriate personal relationship with this person, something in which I was not involved — it was nonetheless very upsetting to learn about. After I learned this, I lost 80 pounds and people who saw me regularly thought that I was physically unwell, when in reality I was just balancing how to be most supportive of Becki, who I love, while also reflecting and praying about whether there were ways I could have been more supportive of her and given her proper attention. I came to realize that while it may be easy to judge others on their behavior, the King James Bible reminds us — “Thou shalt not commit adultery, but I sayeth unto you, that whoever looketh upon a woman to lust after her hath committed adultery with her in his heart.” In fact, there are ways we may all be sinning, but the Lord believes in this self-reflection.”

Falwell was stood down indefinitely by the university’s Board of Trustees after posting an image to Twitter with both his and another woman’s pants unzipped.