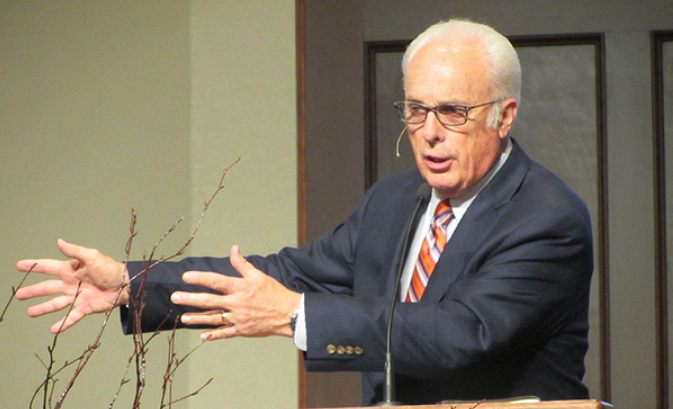 It is hard to believe I am writing this in America, the most Christian of western countries, yet Californian pastor John MacArthur faces the issue of being arrested for running his church.

While you can pop to WalMart or Home Depot with hundreds of others, even the First Amendment rights don’t seem to be standing in the way of Californian officials, who want churches closed.

As My Christian Daily reported last week, Grace Community Church’s head pastor, John MacArthur, ignored Californian authorities and pressed ahead with opening his church. Since then, he now faces arrest if he continues to disobey the laws of Governor California Gavin Newsom, which are some of the toughest in the country.

“After Pastor John MacArthur announced that his congregation at Grace Community Church in Sun Valley, California, would be assembling in obedience to the Word of God, he received a letter from Los Angeles county government officials threatening repercussions such as fines and even possible arrest,” stated Franklin Graham on Facebook.

“But Pastor MacArthur said he isn’t worried about that—he and the church elders voted unanimously that the church will be open this Sunday and every Sunday.”

Last week, he released a statement of defiance, showing courage and bravery, and now, despite threats of being arrested, MacArthur refuses to bow.

In a video posted to his church community, the pastor stated, ”When I started at Grace Community Church 50 years ago, I believed in God’s providence. And what I have seen is 51 years work of the Lord.

“Even today, divine providence has unfolded. The elder statement that we put on our website is still our doctrinal position. Nothing has changed. We will obey God rather than men. We will be faithful to God, not men.

“Whatever happens he will allow to happen, but we do not bow to Caesar. Caesar is not our king. The lord Jesus Christ is our king.

He also went on to say that his church received money from the government during the pandemic, but the church has sent it back.

“I’m not nervous about this,” he continued. “I feel like this is the time in the kingdom to take a stand. What is disappointing is how many churches, particularly large churches, are bowing to Caesar. Churches are saying they are shutting down until January. I don’t understand that. They don’t understand the church’s role.”

The pastor’s stance is sure to be a soft rebuke to the many pastors across the country who have decided to cease services. His trust in God, as well as the First Amendment law that is in place to protect the church from authorities, will very quickly see where pastors stand when it comes to persecution in a country where we have all worshipped freely since time began.

For those that live outside of North America, the First Amendment states that “Congress shall make no law respecting an establishment of religion, or prohibiting the free exercise thereof; or abridging the freedom of speech, or of the press; or the right of the people peaceably to assemble, and to petition the Government for a redress of grievances.”

Just last week, Pastor J.D. Greear, of Summit Church in Durham, North Carolina, told his 12,000 congregants that church facilities will not reopen in 2020 and plans include launching a couple thousand house churches.

Andy Stanley of the Metro Atlanta megachurch, has also suspended all in-person worship services for the remainder of year. Christians will eagerly watch this space to see who follows the courage Pastor John MacArthur is showing.