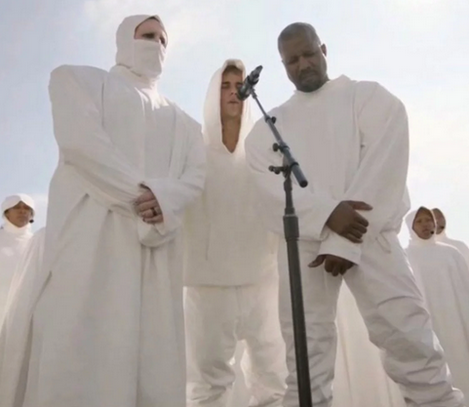 Kanye West is facing backlash over not only inviting Marilyn Manson to his Sunday Services, but also having him pray at the event.

West, who has recently split up from his partner, Kim Kardashian, is apparently still at it with his Sunday Services. But it is getting weirder, with news that Marilyn Manson, who is one of the weirder people in the rock world, was there praying. West, who now likes to be called Ye, also had celebrity Christian Justin Bieber in attendance.

However, both West and Bieber are now facing serious backlash in the form of former Manson accusers who are less than impressed. Women have come forward to detail allegations of sexual abuse against the star. There are reports though that Bieber was not aware that Manson would be in attendance.

According to People, after Manson appeared alongside Bieber and West at the livestreamed Sunday Service, Ashley Morgan Smithline — who has sued the singer alleging physical violence and psychological and sexual abuse — tells PEOPLE it was “just like being traumatized” to see the singer alongside West and Bieber during the prayer service.

“It’s heartbreaking. It makes me sick,” she says. “How is this the world we live in?”

“It makes everyone really *&^#$%^ sick. This is just like being retraumatized. And it’s just showing the point that the world doesn’t really care if you rape and if you beat and hurt all these [women], you can do whatever you want, basically, if you have money and you’re a guy and you’re famous.”

It is reported that several of Manson’s former acquaintances began communicating with one another in September 2020. In a letter dated January 21, 2021, California State Senator Susan Rubio wrote to the director of the FBI and the United States Attorney General, asking them to investigate allegations several women had made against Manson.

On February 1, former fiancée Evan Rachel Wood accused him of abuse. On Instagram and in a statement to Vanity Fair, she said he had been emotionally, physically, and sexually abusive during their relationship over a decade.

Following Wood’s allegations, several other women made various allegations against Manson on Instagram.Manson was immediately dropped by distributing record label Loma Vista Recordings, his talent agency Creative Artists, and his long-time manager Tony Ciulla. He was also removed from future episodes of TV series American Gods and Creepshow, in which he was scheduled to appear.

As of September 2021, Manson has not been charged with any crime related to sexual or domestic violence. In the months that followed, four women filed civil lawsuits against Manson seeking financial compensation. Manson’s legal team issued statements denying the allegations. They filed a motion to dismiss these lawsuits, calling the claims “untrue, meritless” and alleging that several of the accusers “spent months plotting, workshopping, and fine-tuning their stories to turn what were consensual friendships and relationships with Warner from more than a decade ago, into twisted tales that bear no resemblance to reality”.

One of the lawsuits was dismissed on September 16 because of the statute of limitations. The judge gave the complainant 20 days to file an amended complaint with additional details, which she did on September 23. On October 10, 2021, a federal judge denied Manson’s motion to dismiss Bianco’s lawsuit and allowed the case to proceed. The judge ordered Manson to respond to Bianco’s allegations within two weeks.

There have been allegations i nthe past that Manson was a member of the Church of Satan. Manson has downplayed this, stating that he was “not necessarily” a minister in the Church of Satan. “That was something earlier,” Manson continued. “It was a friend of mine who’s now dead, who was a philosopher that I thought I learned a lot from. And that was a title I was given, so a lot of people made a lot out of it. But it’s not a real job, I didn’t get paid for it.”

The Church of Satan itself later confirmed Manson was never ordained as a minister in their church. Manson grew up in a Christian home in Ohio and attended a Christian school.