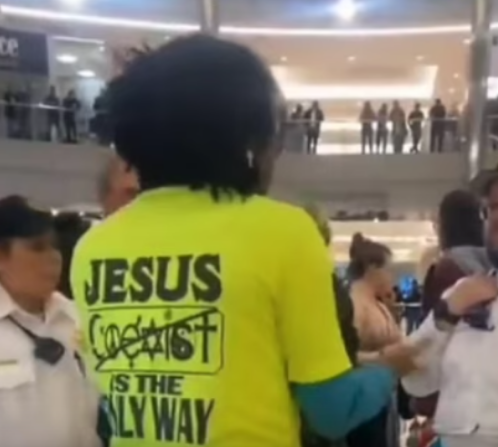 A Christian man has been told to leave a mall, or remove his ‘Jesus Saves’ T-shirt, after shoppers were offended by it.

The man was shopping at a mall in in Bloomington, Minnesota, where the video below shows security telling him to remove his shirt.

The video posted to multiple platforms and viewed more than three million times, shows a security guard at the mall telling the man, “If you want to shop here you need to take off that shirt.”

The man asked, “What is wrong with my t-shirt?”

“It is religious soliciting. There is no soliciting allowed on mall property, which is private property,” the guard replied.

Another part of the video showed the same guard also saying, “Jesus is associated with religion and it is offending people. People have been offended.”

“I didn’t do anything,” the man, Paul Shoro, told The Daily Signal in a Facebook message on Tuesday. “They forced me to take off my shirt.” The mall later said security later allowed Shoro to remain in the mall while wearing the shirt. Shoro’s later comments to The Daily Signal suggest a reason behind mall security’s action, revealing the full story.

Bystander Kameko Rawls took footage of the incident, which has since gone viral on social media.

In the video of the incident on Saturday, Jan. 7, a security guard tells Shoro, “I understand that, but Jesus is associated with religion and it’s offending people.”

“People have been offended,” the guard adds. “Like I said, all we’re asking you is to take your shirt off, and you can go to Macy’s.”

“The guest referenced in the video was approached by Mall of America security on January 7, 2023,” the mall told The Daily Signal in an email statement. “One week prior, he was issued a 24-hour trespass for soliciting guests. After a brief interaction, the guest was not required to change his shirt and was allowed to remain at the Mall.”

As one person comments, “That’s the least of Mall of America’s problems. You’d think they’d handle a shirt like this with a little more grace after the shootings and stabbings they’ve had.”