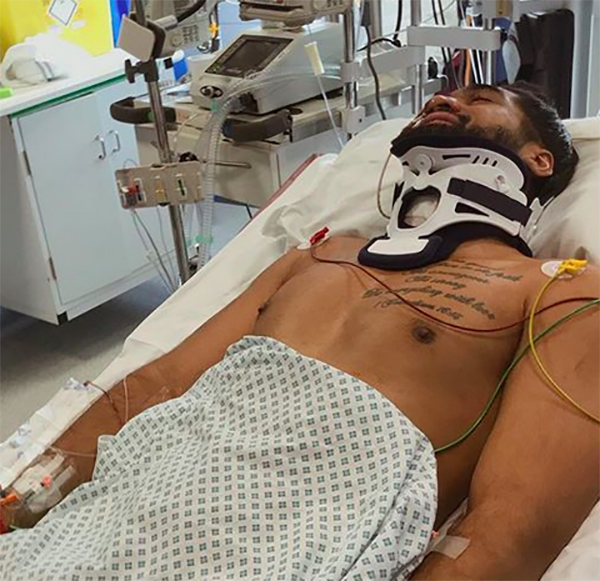 A Kiwi Christian rugby union player based in England is a ‘modern day miracle’ after he started walking again following a devastating injury.

Six weeks ago, Michael Fatialofa, playing for Worcester in the English league, severely injured his spine during a game. His neck injury could have left him paralyzed.

The 28-year-old sustained the blow during the Gallagher Premiership game against Saracens played at the start of the year and was forced to undergo surgery at St Mary’s Hospital to relieve pressure on his spinal cord and was later shifted to Stoke Mandeville Hospital in Buckinghamshire.

Fatialofa’s wife Tatiana posted a video of the Auckland born lock walking and was pleased with his injury progress. “Not blowing smoke when I say ‘Jesus is the answer’,” she wrote on her Instagram account.

“I truly mean it because you are witnessing a MIRACLE that even medical professionals can’t explain. They are so shook by his progress given his critical level of injury.

“Y’all he was literally paralysed from the neck down just 10 weeks ago and currently spinal cord injuries do not have a clinic cure, but my amazing husband is proof that God is never limited to human wisdom. So so so thankful.”

In videos both he and his wife shared on social media, the big forward has taken his first steps. Fatialofa was diagnosed with a spinal contusion, which causes compression on the spine.

The video below is awe inspiring. Just five weeks ago, he stated, “6 weeks deep. Doctors didn’t know me ? Could be years of grinding ahead but determined to get out of this chair.”

The player showed his lighter side in an Instagram video he posted, where as he was falling, he cut to a scene of chuck Norris putting bullets into his gun, the as the gun fired, Fatialofa simultaneously loses his balance as falls to the floor.

The New Zealand born player and his wife, Tatiana, have been documenting his progress throughout his stay in hospital.

What prayer does ??? Highlights from hospital, capturing some of the miracles we’ve seen in motion. All started with a flicker of hope in just one finger ☝? @michaelfats #GODSPEED