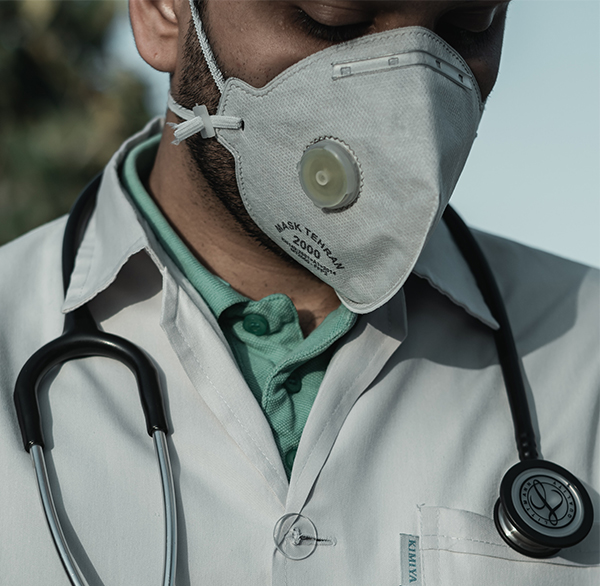 Police in Nepal arrested a Christian pastor this week, accusing him of giving false information about COVID-19 by saying Christian prayer could bring healing from the disease, sources said.

Morning Star News reports that Pastor Keshab Acharya, 32, was taken into custody on Monday (March 23) from his home in Pokhara, Gandaki Pradesh Province, after a video appeared on social media of him rebuking the novel coronavirus as he preached to his church, according to his wife, Junu Acharya.

Pastor Acharya received a phone call from a man requesting prayer for his sick wife at about 8 p.m., she said.

“The person wanted to come to our home for prayer, and my husband agreed, provided him the address and asked him to come over so we can pray for his wife,” Junu Acharya told Morning Star News.

While they waited, the couple’s 2-year-old son wanted to dance with them to a Christian song, Junu Acharya said.

“We were dancing joyfully when there was a knock on the door,” she said. “Three male police officers and a female police officer were at the door. They told us that they were also Christian and needed prayers, and that they had called Pastor Acharya and came for prayer.”

After coming inside, the officers surrounded the pastor and told them they were arresting him, she said. They said he was being charged based on a video circulating in social media in which he prays against and rebukes the novel coronavirus.

“My husband said, ‘If there was any charge against me, you could have let me know directly, and I would have come to the police station all by myself,’ because our 2-year-old son and I were panicked,” Junu Acharya said. “I immediately called two of the brothers from our church who can drive and followed the police’s vehicle. I was afraid that he would be beaten up by police or would be taken to somewhere else. I wanted to ensure that they were taking him to the police station.”

The Nepal police website states that Kaski police officers arrested Pastor Acharya for misleading the public by posting false information on social media about the novel coronavirus. Police cited a video showing Pastor Acharya calling the coronavirus an evil spirit and rebuking it in the name of Christ. He is also seen speaking in tongues as the congregation repeats after him.

On the day he was arrested, the couple had gone to a church member’s home around noon to pray for them, his wife said. While they were away, a ministry staff member received a call from a female urgently requesting healing prayer for her and two other women. The three women came to the church site, and the staff members prayed for them in the absence of the pastor and his wife, Junu Acharya said.

The women kept asking for the pastor, and staff members told them they would be available later in the day, she said.

“We suspect they must have come to check on us, and subsequently police came after 8 p.m. on the same day,” Junu Acharya said. “It sounds strange, because even the women had repeated the same words as that of the officers who came later in the evening that ‘we are Christians and we need prayers for our health, and we want Pastor Acharya to pray for us.’”

Pastor Acharya has been using YouTube to teach and preach since 2015, his wife said.

“We had received many hateful comments,” she said. “There were days when we would wake up to calls from Nepali-speaking Hindus from Australia, Europe and the U.S. abusing him in extremely vulgar language. They had even threatened us that we would be killed brutally.”

The pastor never appeared to be bothered by the comments and did not respond angrily, she said.

“When I was vexed by their comments and messages, he told me that we are doing the Lord’s work, and we are bound to face opposition, but that we should not let these things disappoint us and serve the Lord joyously; we are called to serve Him, and we shall do it,” Junu Acharya said. “That was his only motive.”

Pastor Mukunda Sharma, executive secretary of the Nepal Christian Society, said he had urged District Superintendent of Police Dan Bahadur Karki to act fairly and not implicate Pastor Acharya in any criminal charges.

“I told Mr. Kargi that the police cannot prosecute the pastor for exercising his faith, and that it is a gross violation of human rights, and he had assured me that the pastor was taken into custody only for an enquiry,” Sharma told Morning Star News.

Later Kargi informed Pastor Sharma that he had presented Pastor Acharya before a judge, who sent him for remand for the seven days.

“It seems Kargi had sought permission from the court to investigate the matter,” Pastor Sharma said.

He said he has been unable to visit the jailed pastor as Nepal government officials announced a lockdown until Tuesday (March 31) to contain the spread of Covid-19.

“I have been sending pleas to authorities for a travel-pass to reach Pokhara,” Pastor Sharma told Morning Star News.

Karki told the Himalayan Times that Pastor Acharya was in police custody and that preparations were underway to take action against him. Police reportedly said the pastor could be sent to prison for six months.

The Himalayan Times made reference to Pastor Acharya preaching in a squatters area, but the police report cites only his comments on social media.

C.B. Gahatraj, president of the Federation of National Christians in Nepal (FNCN), told Morning Star News that the arrest of the Nepali Christian leader is unacceptable and against Nepal’s constitution.

“The entire world is under attack by the Covid-19, and during this time people from across all religions are praying for it to stop,” Gahatraj told Morning Star News. “By this act, religious harmony is in danger during a time when people are already in chaos.”

Nothing in the video indicates any violation of law, he said.

“It is clear that it was a sermon preached by Pastor Acharya within his respective congregation, and our federation asserts that this practice of praying is not in conflict with the laws of Nepal,” Gahatraj said.

Secularism is institutionalized in the preamble of the new constitution, Gahatraj said.

Nepal’s constitution guarantees freedom of religion, and all citizens have the right to profess, practice and protect their faith, Pastor Sharma added. He appealed to the Nepal government to respect basic religious freedom as described in Article 18 of the Universal Declaration of Human Rights and Article 18 of the International Covenant on Civil and Political Rights.

“I make a request to the body of Christ worldwide to pray him, the Nepal government and the Christian community in Nepal,” Pastor Sharma said.

Junu Acharya said the arrest has been especially difficult during the novel coronavirus pandemic.

“I’m back home caring for our 6-month-old son [along with the 2-year-old son], and my husband is imprisoned at district jail,” she said. “I have stepped back from speaking to anyone outside the faith because I am afraid that they might misinterpret my words and put him in more trouble by booking him under serious charges.”

On Sept. 22, 2017, four Christians in Nepal were released after being sentenced to five years in prison for praying for a mentally troubled woman. A high court annulled the convictions of Lali Pun, Bimkali Budha, Suk Lal Pariyar and Ganga Pariyar, who had been charged with witchcraft in Salyan District Court on May 19, 2016 for praying for the woman.

Besides the prison sentences, the Christians had been told to pay a fine of 50,000 Nepalese rupees (US$475), an overwhelming sum in Nepal. A fifth Christian, Rupa Thapa, was arrested with them but was declared not guilty and released in 2016.

While the new constitution passed in September 2015 establishes Nepal as a secular and democratic republic, its definition of “secular” appears to protect Hinduism and allows others only to worship in their own faiths. Article 26 forbids anyone to “convert a person of one religion to another religion, or disturb the religion of other people.”

Advocacy groups have detected increased enforcement and other anti-Christian efforts as officials seek to placate Hindus incensed that the new constitution did not re-establish a more prominent place for Hinduism.

A landlocked country between the giants of India and China, Nepal is said to be more than 75 percent Hindu and 16 percent Buddhist. Christians are estimated to make up nearly 3 percent of Nepal’s population, and Muslims 4.4 percent.

Nepal is ranked 32nd on Christian support organization Open Doors’ 2020 World Watch List of the countries where it is most difficult to be a Christian.