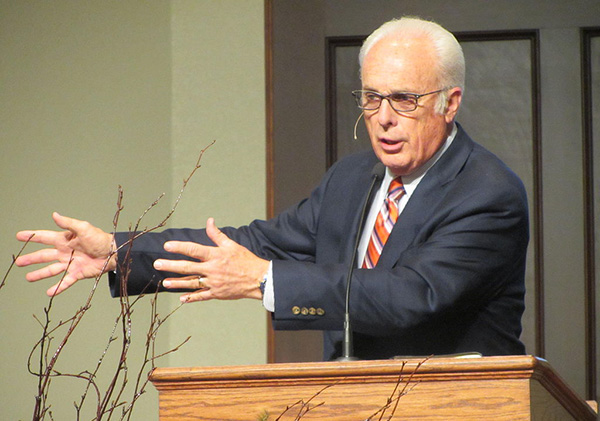 “There is no Biblical case that can be made for a woman preaching. Period.”

That was the comment from Pastor and author John MacArthur at ‘The Truth Matters Conference’. During the conference, a panel took place, chaired by another pastor, Todd Friel. MacArthur was asked to give a two word response to Beth Moore.

MacArthur was also joined on stage by Voddie Baucham and Phil Johnson, who were both speakers at the conference. Held in Los Angeles, the conference ran From October 16 through 18.

The response to the criticism of the Southern Baptist’s pin-up female preacher was laughter.

John MacArthur is the pastor-teacher of Grace Community Church in Sun Valley, California, chancellor of The Master’s University and Seminary, and featured Bible teacher of the Grace to You media ministry. He has also written dozens of books.

Phil Johnson was then asked for then added that he thought she was. “Narcissistic,” he commented. “This is what it looks like to preach yourself rather than Christ. In fact she has said, ‘I read the Bible and I try to put myself in the narrative’. And this is exactly what she does.”

Baucham then commented, “Just because you have the skill to sell jewellery on the TV channel doesn’t mean you should sell. There are people that have the energy to sell. That doesn’t qualify you to preach.”

He went on to say that the church is “caving in to female preachers. When the leaders of evangelicals roll over for female preachers, the feminists have really won the battle.”

The comments from the three respected pastors on a live stage seem incredulous, given most people would save such strong comments for their opinions with close friends or associates, but not in front of a filmed segment that is shared to Youtube.

My Christian Daily reached out to both John MacArthur and Beth Moore for comment, but has not received a response at the time of publishing.