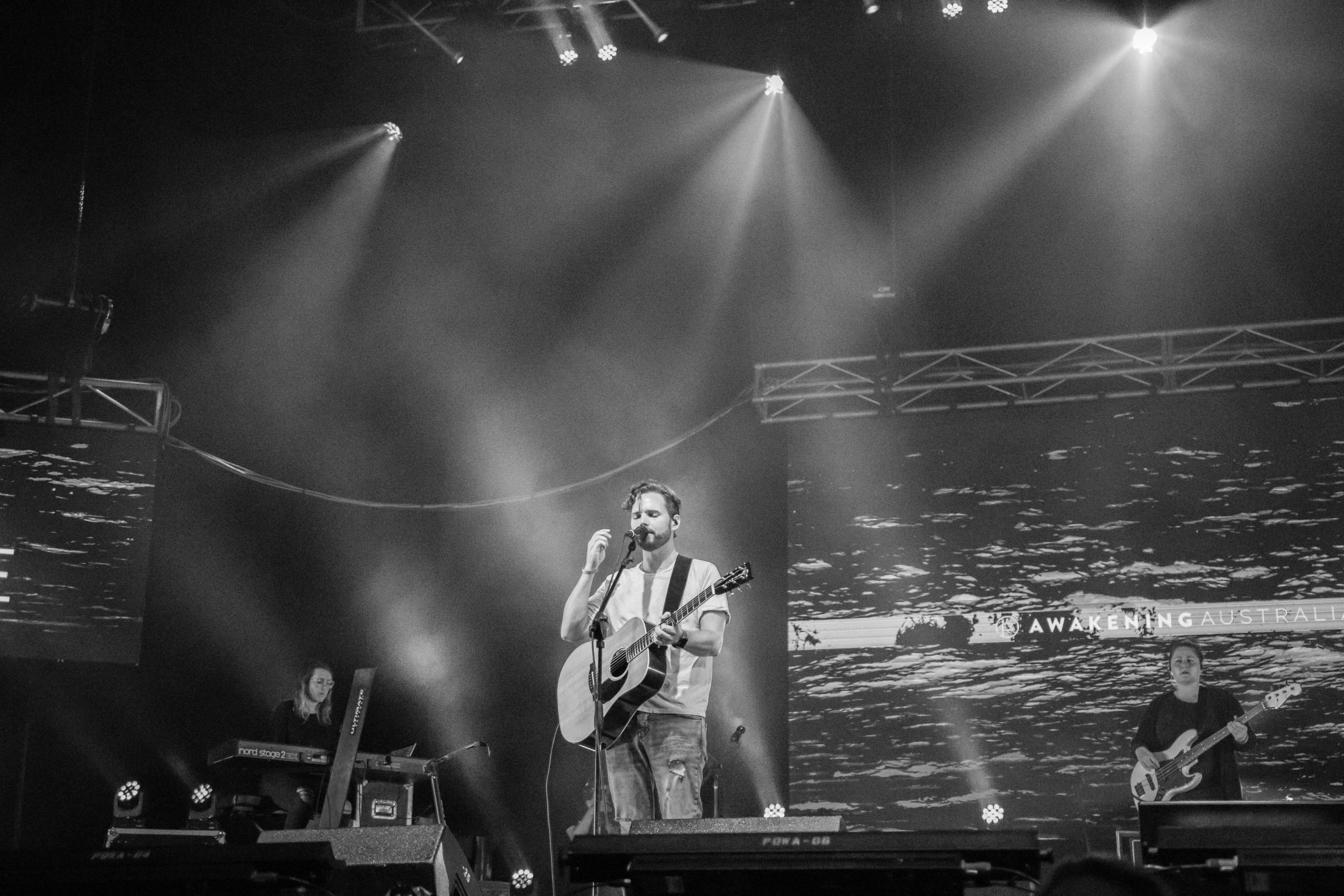 The question goes something like this: “Is it possible to not endorse or agree with (such-and-such church) but still listen to their worship in a corporate setting?” First, I want to be clear that my position has never been “I don’t care what the roots are; I’m playing their music.” I myself am in the process of evaluating.

I recently preached a sermon on revival, with Bryan and Katie Torwalt leading worship. To view the controversial event that sparked this article, click here and then let us know your thoughts. Was the service God-honoring? Were the lyrics theologically sound? Was the message biblically accurate, calling the nation to repentance? Could there be abundant fruit?

Just for reference sake, I use the MacArthur Study Bible, read the Puritans, and love any preaching from Lloyd-Jones, Spurgeon, and the like, so make sure to watch my video below to better understand my position versus just reading this alone. I’m not endorsing and promoting Bethel, for example. I have concerns too. I understand that playing a church’s music (in a sense) is viewed as promoting them. I get that, but there is a huge difference between direct promotion and indirect promotion because we have to legally acknowledge the source of the songs for licensing reasons.

With that said, I’ve put forth a few questions and answers that may offer clarity:

1. How inconsistent should a group be before we completely discontinue their worship? Should we also eliminate songs from Elevation Worship, Hillsong, and a few others because we disagree with some of what their pastors teach? Yes and no. It all depends on the severity of their error. Some people draw the line in the sand much quicker in regard to removing their music, while others are not there yet. This is what is happening here—many are not prepared to draw that line yet.

2. Have I done my due diligence in investigating these bands? The problem is that there are many conflicting reports. I know people who attend Bethel, and they say the complete opposite of those who condemn it. For example, Bethel’s leadership condemns grave-sucking here, but people still say that they teach it. Yes, I have seen the picture of lead pastor Bill Johnson’s wife near a grave, but pictures don’t always tell the whole story. You wouldn’t believe the amount of heresy hunters I heard from when I released this picture.

But, with that said, I have also heard Bill Johnson say things that he needs to clarify. I talked to Bethel Communications for over an hour several months ago. They said they were releasing short clips explaining the controversies, so I sent the following email to Bethel fairly recently. I have not heard back, but I’m giving them the benefit of the doubt because of the COVID-19 crisis:

“I appreciate your time. Any updates on when the short videos will be coming out clarifying Bethel’s position on some of the odd things that have been said? Many people need clarification rather soon. We play your music in our church and on our radio stations WCFRadio.org, and many want answers. Sorry to be a burden. I just think it’s very important to clarify when clarification is needed.”

Because I myself have often been misrepresented, I appreciate those who try to hear both sides. That’s where many are at; are they not allowed that opportunity? I just wish that the majority of the critics weren’t so arrogant and condescending. It really reveals their heart.

3. Human opinion never trumps God’s Word, but there is safety in the multitude of counsel. I have asked countless believers for their input, and a significant percentage saw nothing wrong with playing music that is questionable to some. I also look at the spiritual condition of the worship leaders. For example, any idea on who wrote this: “So much heresy is running rampant in the church because we’re not clearly preaching the reality of eternal judgment, the reality of heaven and hell, or the frequent commands concerning holiness, godliness, purity and true Jesus apprenticeship”? Jeremy Riddle, worship leader at Bethel, wrote that on April 10th of this year on his Facebook page. In case you missed it, that’s a powerful declaration of sound doctrine. My concern is that we may be throwing out the baby with the bathwater too soon.

While not true of everyone, the vast majority of those who have issues with this music seem to disdain emotional worship and are often not open to what is referred to as revival. They don’t like to sing “Let It Rain” because they don’t want to get wet.

I stand in awe of how many famous conservative pastors quote George Whitefield yet fail to acknowledge the oddities that happened under his preaching. The same is true of Jonathan Edwards and others who ushered in great moves of the Spirit. Now, with that said, I am not validating questionable ministries. I have similar concerns as many of the critics, but it is interesting that those mocking are often the same people who would (and do) mock a genuine move of God’s Spirit. I’m hoping that this article sparks dialogue within the controversial bands and a movement to revisit theology is sparked.

Most of these worship groups are young and need theological grounding. Perhaps the young musicians in some of these bands just need believers who are spiritually mature reaching out to them rather than calling them heretical.

In closing, my big concern for many of us is found in Revelation 2:2-5 (NIV), “I know your deeds, your hard work and your perseverance. I know that you cannot tolerate wicked people, that you have tested those who claim to be apostles but are not, and have found them false.” Jesus continues, “Yet I hold this against you: You have forsaken the love you had at first. Consider how far you have fallen! Repent and do the things you did at first. If you do not repent, I will come to you and remove your lampstand from its place.”

In this sermon, I talk about when my heart was very hard and I was becoming a modern-day Pharisee.

The New Apostolic Reformation (NAR) always seems to slip into this type of discussion. Since I don’t know much about the NAR, I found a video for those interested: “The Truth About NAR and 7 Mountain Theology.”

Michael Brown also interviewed Bill Johnson in this video. Granted, I would have asked harder questions, but he was still able to clarify many things. Here is what baffles me: it’s almost like people don’t want to know the facts.