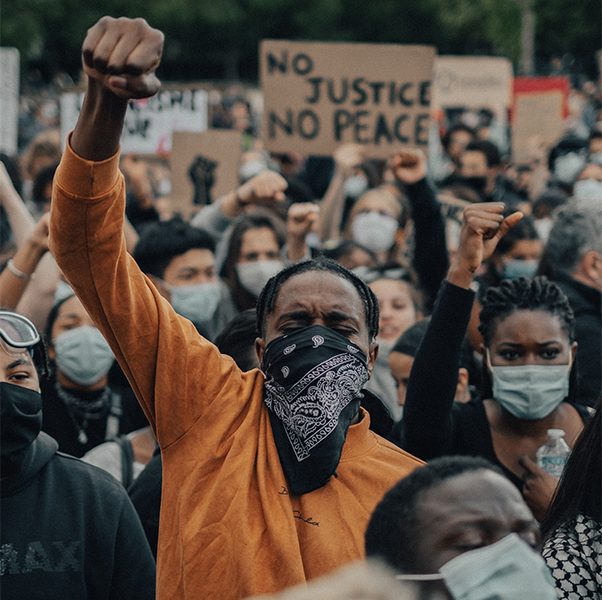 I want to make it clear that this blog is not a judgment on America. We have plenty of race-related challenges in Australia, so I’m not about to point the finger at another country.

But right now, the world is watching on in horror at the events in the United States. The brutal murder of George Floyd is just the latest in a string of black people killed by police.

Many of them were going about their daily lives (sleeping, driving, walking, at home) while others had a mental health episode and desperately needed professional help.

Many of them became hashtags that were quickly forgotten by society. So, it’s easy to understand the boiling anger of people who feel unsafe.

George Floyd had a criminal past. He’d spent time in jail for a 2007 assault and robbery and convicted of charges ranging from theft of a firearm to drugs.

Several years ago, George Floyd moved to Minneapolis for job placement and a Christian discipleship program. He became a committed Christian and wanted to turn his life around.

Then came the fateful day when George Floyd was accused of handing over a fake $20 bill to buy some cigarettes. It’s unlikely that Floyd knew the bill was fake. The store owner said they would no longer call the cops in similar situations: “Police are supposed to protect and serve their communities; instead, what we’ve seen over and over again is the police abusing their power and violating the people’s trust. We realize now that escalating situations to the police almost always does more harm than good, even for something as harmless as a fake bill.”

The video of Officer Derek Chauvin kneeling on the neck of George Floyd is horrendous. People standing around are begging Chauvin to get off his neck. Neither Chauvin nor the other officers do anything, and Floyd falls unconscious.

Chauvin’s wife has filed for divorce; and riots and looting grip America. No doubt there is opportunism going on, but this should not blind us to the deep anger and frustration of many Americans, not just African Americans.

Enter the US President

In the midst of this, the US President had a photo opportunity with a Bible in front of St John’s Church; a little like Nero playing the fiddle while Rome burned.

Protesters had been cleared from the area using force minutes beforehand.

The cynic in me thinks this was a political ploy to shore up the Evangelical vote that brought him to power four years ago. With a looming election and dismal polling, he needs to do all he can.

The vast majority of Americans are dissatisfied with their president’s handling of the coronavirus pandemic and the riots.

According to Ryan Burge (Eastern Illinois University), white evangelical Christians have the highest racial resentment score in the US.

How bizarre that followers of Jesus (and readers of the Bible) should be totally out of whack with his teachings.

But this research sheds some light on why the deep racial divisions thrive even in a profoundly religious country.

One hundred and fifty five years have passed since the 13th Amendment ended slavery, but white superiority and its corresponding prejudice and brutality are alive and well.

The Curse of Ham

Justification for slavery was based on a flawed doctrine called “The Curse of Ham” (Genesis chapter 9).

The story occurs in the context of Noah’s drunkenness and a shameful act perpetrated by Noah’s son Ham, who “saw the nakedness of his father.”

A myth was proclaimed by certain preachers that Ham’s punishment was for his skin to be turned black: “Cursed be Canaan [Ham’s son]. The lowest of slaves will he be to his brothers” (Genesis 9:25). This erroneous teaching has justified enslaving black races for hundreds of years; they’re inferior, they’re cursed, and the Bible is clear!

In the 1800’s, George Fitzhugh, an American lawyer and social theorist, argued that African slavery was “expressly and continually justified by Holy Writ [and] natural, normal, and necessary.”

Bishop Stephen Elliott of Georgia, suggested that slavery was beneficial for Africans: “For nearly a hundred years the English and American Churches have been striving to civilize and Christianize Western Africa, and with what result? Around Sierra Leone, and in the neighbourhood of Cape Palmas, a few natives have been made Christians, and some nations have been partially civilized; but what a small number in comparison with the thousands, nay, I may say millions, who have learned the way to Heaven and who have been made to know their Saviour through the means of African slavery! At this very moment there are from three to four millions of Africans, educating for earth and for Heaven in the so vilified Southern States…These considerations satisfy me with their condition, and assure me that it is the best relation they can, for the present, be made to occupy.”

How profound! I wonder if Frederick Douglass were alive today would he say the same about some sectors of Christianity in America? “I can see no reason but the most deceitful one for calling the religion of this land Christianity…”

A Christian that espouses violence against enemy, clears a crowd with tear gas to hold up a Bible, and is more likely than any other group in society to be resentful of non-white races, is far from the faith taught and modelled by Jesus.

There is no doubt that America has a massive problem on its hands.

What is needed is compassionate leadership, a de-politicised Christianity, and all people seeing all people as equal.

God created everyone in his image (James 3:9-10; Acts 17:28), and everyone has the same remote ancestry. That means every human being is our brother or sister with an equal right to worth, dignity, respect, and justice.