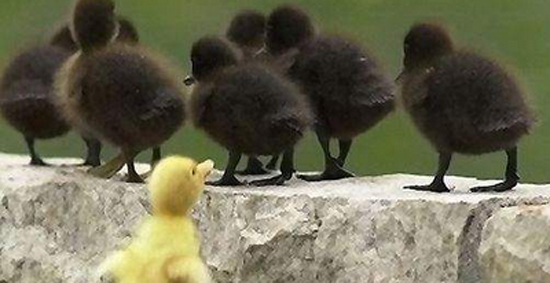 We’ve all felt like the Ugly Duckling at some point in our lives. We look around at everyone else, and we conclude that we’re worthless. Absolutely worthless.

We’ve all been that Ugly Duckling. You have. I have.

So here are the 4 Steps to overcoming … “Ugly Duckling Syndrome”.

1. When People Scorn You, Simply Don’t Believe Them
At last the large egg broke, and a young one crept forth crying, “Peep, peep.” It was very large and ugly … “Let him alone,” said the mother; “he is not doing any harm.”

“Yes, but he is so big and ugly,” said the spiteful duck “and therefore he must be turned out.”

“The others are very pretty children,” said the old duck, with the rag on her leg, “all but that one; I wish his mother could improve him a little.”

And so they made themselves comfortable; but the poor duckling, who had crept out of his shell last of all, and looked so ugly, was bitten and pushed and made fun of, not only by the ducks, but by all the poultry.

2. Believe What God Says About You Instead
All too often, comparing ourselves with others, listening to the criticisms of others – is like looking at your image in one of those distorted mirrors we used to see down in the side-show alleys when we were kids. It doesn’t give us a true image of who we are.

What does God have to say about you? Simple really. It’s straight out of His Word.

For it was you who formed my inward parts; you knit me together in my mother’s womb. I praise you, for I am fearfully and wonderfully made. Wonderful are your works; that I know very well.

My frame was not hidden from you, when I was being made in secret, intricately woven in the depths of the earth. Your eyes beheld my unformed substance. In your book were written all the days that were formed for me,when none of them as yet existed.

3. Know that You Were Made with a Clear Purpose In Mind
God didn’t make a mistake when He made you. He exquisitely handcrafted you as a unique creation, wondrously beautiful in His sight. You are a one of a kind.

So precious, that He would send Jesus to die that your sins may be forgiven, and to rise again that you may live a new life. That’s something He is not going to waste. You were definitely, definitely created with a magnificent purpose in mind. Handcrafted for that purpose.

For we are his workmanship, created in Christ Jesus to do the good works that God prepared beforehand for us to walk into. (Ephesians 2:10)

The Lord your God has put a special gift inside you, with which He plans to bless the rest of us. And He wants you to know that and believe that … today.

4. Discover that Purpose and Live it Out to the Full
We’ve each been made so differently. That’s why comparing ourselves to others is such a crazy thing to do. There is something that you can do better than anybody else you know. There’s something you enjoy doing so much, but perhaps you’ve been squeezed into the world’s mould, and forced to be a duckling instead of a swan.
Even though you are … you always were … you were created to be … a swan.

All your life you’ve been dreaming a dream. It’s time to live it.

All your life there’s been a song in your heart. It’s time to sing it.

All your life, there’s been this special gift from God inside you.

It’s time to use it.

It’s time to be the you that God made you to be.

But what did he see in the clear stream below? His own image; no longer a dark, gray bird, ugly and disagreeable to look at, but a graceful and beautiful swan.

To be born in a duck’s nest in a farmyard is of no consequence to a bird, if it is hatched from a swan’s egg.