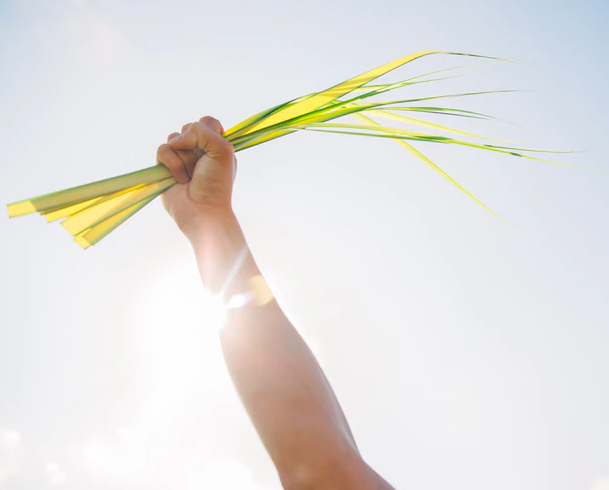 Palm Sunday commemorates Jesus’ triumphal entry into Jerusalem, an event that is so important it’s mentioned in all four gospels.[1]

It’s five days before Jesus’ crucifixion. A few days previously, Lazarus was raised from the dead. The day before the first Palm Sunday, Jesus had a meal with Lazarus, Martha and Mary to celebrate Lazarus’ resurrection. During the dinner, Mary anointed Jesus with expensive perfume. The house became filled with a beautiful aroma and some stinking attitudes! Jesus’ popularity was at an all-time high because of Lazarus. The religious leaders, jealous of Jesus’ popularity, hated him more than ever and desired to kill him. They wanted to kill Lazarus, too, “for, on account of him, many of the Jews were going over to Jesus and believing in him.”

Early on Palm Sunday morning, Jesus commissioned two disciples to go to a nearby village to commandeer a donkey and its colt. Both animals were later returned to their owner. Jesus would be the first person to ever ride the colt.

Officials rode donkeys for civil, not military, parades, while an army procession would use horses & chariots. Jesus rode on a donkey’s colt, a young male donkey less than four years old.

Palm Sunday occurs five days before Passover, the Jewish Feast that celebrates God’s deliverance of Israel from slavery in Egypt. The crowd’s expectation was for Jesus to lead them against the Romans and bring salvation to Israel as Moses did.

By spreading garments and waving and scattering palm branches, the people paid royal homage to King Jesus. And they sang words from The Great Hallel, Psalms of praise (111-118) that were used extensively at Passover.

Blessed is he who comes in the name of the Lord.

From the house of the Lord we bless you.

The Lord is God,

and he has made his light shine on us.

With boughs in hand, join in the festal procession

Hosanna means “save now” or “save, I beg you.” The people were proclaiming Jesus as king and trying to force his hand to overthrow Rome and establish the kingdom of God.

Jesus had already taught the people that His kingdom was not of this world. Salvation at that time was not to be with military might, political power, or geographical location. Salvation was to be internal – freedom from the inside out. That was Jesus’ mission right from the start, to preach good news to the poor, proclaim liberty for the prisoners and recovery of sight for the blind, release the oppressed, and proclaim the year of the Lord’s favour. (Luke 4:18-19).

Many in Israel missed the Messiah because He came in an unlikely way with an unexpected message. Some people today overlook the Messiah as well because Jesus is not what they’re expecting. They have misguided expectations:

If you’re looking to Jesus to be any of these things, you will be sorely disappointed!

I encourage you this Palm Sunday to revisit this remarkable story with fresh eyes. And don’t miss the Messiah because you’re looking for Jesus to be something he is not.