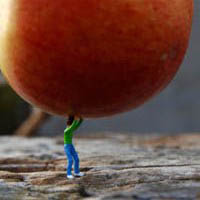 Every now and then, you meet a giant in your life. I’m talking a good giant here, not a bad one. The sort that Isaac Newton spoke of when he said:

If at times it appeared that I could see further than others, it’s because I’ve stood on the shoulders of giants.

Here are 3 powerful lessons that I learned from a “small giant” in my life.

His Name Is Phil Littlejohn

He was the pastor of a tiny church – the Oyster Bay Christian Church – in the southern suburbs of Sydney, Australia, when I arrived there a broken man, just a few months after giving my life to Jesus in October 1995. Phil had been the pastor there for ages – in fact, he’s only just retired.

Now Phil is a great and passionate Bible teacher, so I learned a lot from his teaching.

But as is always the case, you can learn so much more from the sermon preached through a man’s life, than you can from the ones he preaches from the pulpit. So here are the three big lessons I learned by watching Phil live his life:

Phil used to talk a lot about what he called – stickability. Just hanging in there through thick and thin. Just showing up – whether it felt good, or not. Whether it was convenient, or not. I don’t know quite how long he pastored that church – must be over 3 decades.

Some people love to live out what I call a convenient Christianity. Do it when it feels good and doesn’t cost you too much. Funny, I’ve been looking for that form of Christianity in my Bible – but I just can’t find it anywhere.

Yep. The biggest thing I learned from Phil … is stickability.

Without a doubt, Phil is one of a handful of giants in my life. He had me preaching within months of becoming a Christian. He encouraged me to go to Bible college. He laughed with me and most importantly he wept with me. So much of what I share with millions of people each week through my radio programs, I heard first from him.

In every sense, he is one of the giants upon whose shoulders I stand. But … here’s the paradox.

He leaves a small footprint. In fact, the bigger the giant, the smaller the footprint.

Phil is, physically, a small man. His surname is Littlejohn. His voice is rather high pitched – by his own admission, not well suited to preaching or teaching. An odd giant indeed. But, it’s not just his physical stature.

If ever there were a man who personified Paul’s command for us not to think more highly of ourselves than we should (Romans 12:3) – it’s Phil.

He genuinely doesn’t care about title, position or reputation. While he’s a strong and effective leader, he seems not to factor himself into the decision making process. He’s interested in building teams and achieving outcomes instead of promoting himself.

I arrived at the Oyster Bay Christian Church back in 1995 with an ego the size of a small planet.

Yep – the small footprint of a true giant was the second most important lesson I learned from Phil.

And the third one follows pretty close on its heals. Phil had a very healthy disdain for religiosity. He refused to be called “Reverend”. He refused to be bound by religious traditions. Here was a man with a passion for opening the Word of God, discovering what God was saying to us, sharing it with the flock under his care and living it – to the best abilities – with the life that God had given him, in the place that God had planted him.

I remember when I asked to be baptised. He said “Well, who would you like to baptise you?”

I was shocked – Well you of course! You’re the minister.

Through that and many other lessons like it, God birthed a passion in my heart to open the Bible, hear what He was saying, and share it with others.

Plain and simple. No religious bells and whistles.

On that day in February 1996 that I wondered into that humble little church in Oyster Bay … I simply had no idea of the journey that was about to begin. I had no idea the lessons the Lord would teach me … through this small giant.

And Phil, on the occasion of your retirement, the most powerful thing I can do, is to share the Word of God with you:

Blessed are you when people revile you and persecute you and utter all kinds of evil against you falsely on my account. Rejoice and be glad, for your reward is great in heaven, for in the same way they persecuted the prophets who were before you. (Matt 5:11,12)