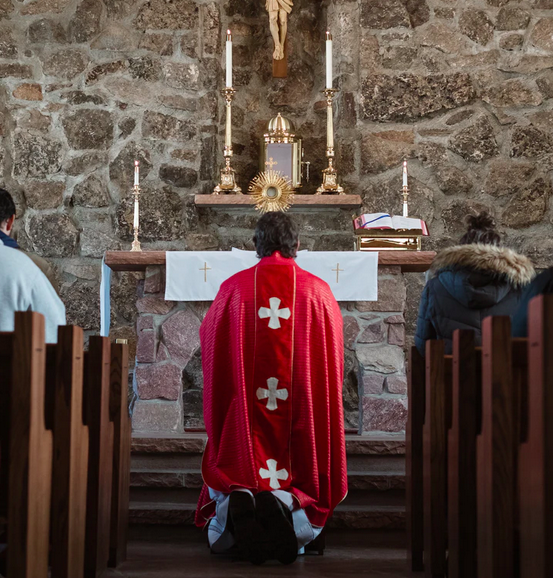 A top Catholic official has resigned after data on his cell phone reportedly tracked him to gay app Grindr, as well as frequenting gay bars.

As first reported in the Washington Post, a Catholic media site told a U.S. bishops’ conference Monsignor Jeffrey Burrill, who is the head of the U.S. Conference of Catholic Bishops (USCCB), that it had access to cellphone data that appeared to show he was a regular user of Grindr, the queer dating app, and frequented gay bars.

Priests take a vow of celibacy, and to this day the Catholic Church does not believe in any marriage outside of a heterosexual marriage.

“What was shared with us did not include allegations of misconduct with minors. However, in order to avoid becoming a distraction to the operations and ongoing work of the Conference, Monsignor Burrill has resigned, effective immediately.

“The Conference takes all allegations of misconduct seriously and will pursue all appropriate steps to address them.”

The news was first reported on Catholic newsletter The Pillar. “An analysis of app data signals correlated to Burrill’s mobile device shows the priest also visited gay bars and private residences while using a location-based hookup app in numerous cities from 2018 to 2020, even while traveling on assignment for the U.S. bishops’ conference,” it claimed.

“According to commercially available records of app signal data obtained by The Pillar, a mobile device correlated to Burrill emitted app data signals from the location-based hookup app Grindr on a near-daily basis during parts of 2018, 2019, and 2020 — at both his USCCB office and his USCCB-owned residence, as well as during USCCB meetings and events in other cities.

“Commercially available app signal data does not identify the names of app users, but instead correlates a unique numerical identifier to each mobile device using particular apps. Signal data, collected by apps after users consent to data collection, is aggregated and sold by data vendors. It can be analyzed to provide timestamped location data and usage information for each numbered device.”

According to the United States Conference of Catholic Bishops, Msgr. Burrill is a priest of the Diocese of La Crosse, Wisconsin, where he served as pastor of St. Bronislava Church from 2013-2016. Previously, he served at the Pontifical North American College in Rome from 2009-2013, first as director of apostolic formation and then as the Carl J. Peter chair of homiletics, formation advisor, and director of media relations. He was pastor of the tri-parishes of St. Mary’s, Durand, Holy Rosary, Lima, and Sacred Heart of Jesus in Mondovi, Wisconsin, from 2001 through 2009. He taught and served as chaplain at Regis High School and Middle School in Eau Claire, Wisconsin, from 1999 to 2001.

“Msgr. Burrill earned a bachelor of arts degree from Saint Mary’s College Immaculate Heart of Mary Seminary in Winona, Minnesota, in 1994; a bachelor of sacred theology from the Gregorian University in Rome in 1997; and a licentiate in ecumenical theology from the Angelicum University, also in Rome, in 1999. He was ordained to the priesthood in 1998 in the Diocese of La Crosse. He served in several leadership positions for the diocese, including six years as a regional vicar and two terms on the Diocesan Presbyteral Council. Msgr. Burrill also served as the ecumenical officer and as a member of the seminary admissions board.